Do you know that WordPress has topped the list of fastest-growing content management systems or the best content management system of 2022! Isn’t it some excitingly good news! Who doesn’t want the CMS that has offered its outstanding services to everyone throughout the year to get proper acknowledgment! And, according to the most popular review website, WordPress has secured its place as the most dominant CMS on the market. The excellence of WordPress’s services is really undeniable.

Well, according to the list released by W3Tech, WordPress is holding the top positions as the fastest developing CMS of 2022. And it is not the first time that WordPress has reached this position; rather it has been seven consecutive years that WordPress is making us amazed by its brilliant services. Believe it or not, WordPress is accompanied by major web technologies, such as Ubuntu, Google Analytics, Cloudflare and Amazon in the list provided by W3Tech.

Statistics On WordPress Usage for 2022 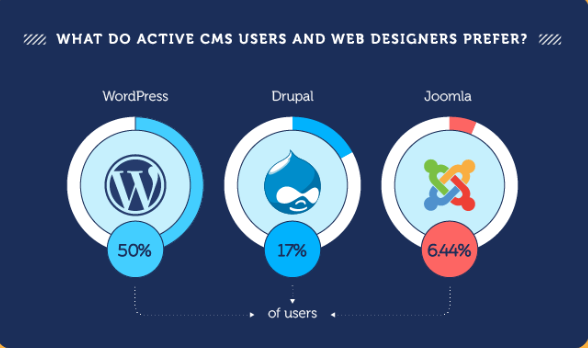 Since 2010, when WordPress first became the top CMS of the year, it has considerably increased its usage, retaining the position of CMS of 2020 even in this year. Increasing the usage to more than twice its beginning, WordPress has demonstrated dynamic abilities, unstoppable growth, and integration with various new features.

With such a percentage of increased usage within a year, this fastest developing CMS of 2020 definitely has no possibility of slowing down anytime soon.  Rather, by recently including the content endpoints of REST API in the core software, WordPress has gained more potential for steady growth, than ever. Making the development of WordPress more flexible and easier, the REST API has increased its adaptability to other websites. There is even a chance of the adoption rate of WordPress going higher in 2021.

Apart from WordPress being the CMS of 2021, there are also other prominent web technologies that made it to the top list, but in different categories.

How to Generate Blog Traffic: Ways to Make Your Blog Popular in 2021