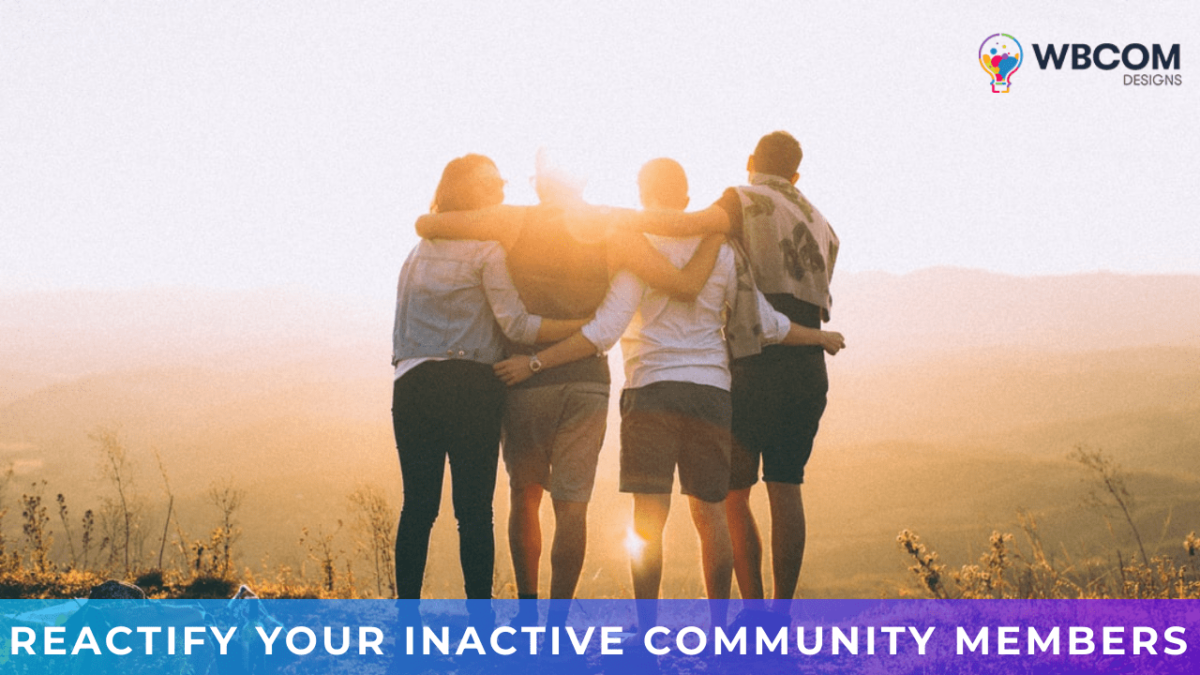 You’ve created a community, but now you want to start building it into something bigger. How do you reactify the inactive members? What kind of actions should you take? Let’s dive deep together and learn how to handle this issue.

Reactivating inactive community members has become a popular topic recently because there are so many inactive accounts out there. The problem is that the only way they can come back is to log in for themselves. If they don’t remember their credentials, then they won’t be able to access their account. That means you’ll have to waste time tracking them down. And even worse, some of them might not be interested in returning at all.

So how do you reactivate these inactive users without wasting your precious time or causing further damage to your community? You must identify their reason for being inactive before taking action. Is it simply boredom? Or maybe it’s a lack of interest in your project? In this blog, we will have a look at such reasons and how to fix them.

Why do many members become inactive?

The community members don’t cease taking part for any particular reason. If there were, resolving the problem would be easier. There are several reasons why members of your group might decide to leave. They enrolled to test the service for free but departed once it ended, which is regarded to be the most prevalent explanation.

In other circumstances, the person might have started working longer hours or maybe had a baby. They may have lost interest after failing to check in. Whatever the reason, it is possible to re-connect these apathetic neighborhood residents.

However, if they have left due to another reason, such as having forgotten their password, then you’re going to need to find them first. This could mean digging through old emails or searching for clues on social media. It might also require a little detective work to figure out where they live.

Also Read: How to start engagement in your community?

Once you know what the reason is, you can proceed with the next step.

What to do when an inactive member returns?

If someone becomes inactive, it doesn’t necessarily mean they never intend to return. Some people just get busy with life and forget about their community. So you shouldn’t give up hope just yet. Instead, try to understand why they became inactive in the first place. Maybe they got a new job or moved away from home. Perhaps they’re too tired to participate anymore.

If you think it’s one of those cases, then you’ll need to make sure you keep them engaged. Keep them informed of upcoming events and activities. Send them messages reminding them of the benefits of staying active. Make sure they know how much you value their presence in your community.

But if you suspect that the inactive user was never really interested in joining your group in the first place, then you should consider deactivating them instead. Deactivating users is easy and takes less than five minutes. Once you’ve done that, you can send them a message asking them to rejoin.

This is a good option if the inactive user isn’t responding to your attempts to reconnect. However, if they still haven’t responded after a week or two, you should consider contacting the police. If the person hasn’t been seen for more than six months, then they might be missing.

Deactivating inactive members is a great way to save yourself time and energy. But it does take a bit of effort to set things up properly. If you want to avoid losing valuable members, then you’ll need a plan to deal with inactive users.

Also Read: What are WordPress Widgets And How to Use Them ?

Converting an uninterested member into an active member takes a lot of effort. It is quite difficult, but what if you want to keep your community thriving? Here are four ways to reactivate inactive community members:

1. Try to figure out their reason for getting inactive

Finding out why they left is essential if you want to reconnect with members who haven’t been active or who have allowed their membership in your group to lapse. Even if you don’t get them back, the knowledge you gather can help you design a course that will lessen the likelihood that you’ll lose them.

For instance, learning that community members and consumers have abandoned you because you don’t offer private chat can give you knowledge that will guide your future activities.

Don’t let someone go unnoticed (if you can) if you don’t see them renewing their subscription or if they decide to delete their account.

Also Read: How to create a professional learning community?

In order to entice them back into the fold, identify which previous members have left the group and then give them an offer based on their prior behavior. For instance, you may offer them a few months of membership at a reduced rate if they’ve decided not to renew their paid membership. Add a deadline to the offer to convey a sense of urgency. It might be included in a message that says, “We are sorry to have you,” if you’d like the offer.

Community leaders that are looking for strategies to reactivate inactive clients frequently use an email with the subject line “remember us.” However, you need to use this type of communication with extreme caution because it won’t work to emphasize how isolated your firm has become since the community member left.

It’s better to express gratitude to members for their earlier interest in the community, ask them if they’d be prepared to react and share the reason they terminated their membership, and then extend an offer of a temporary discount should they wish to re-join.

Community members occasionally retreat because they feel like they “have been there before, done that.” The majority of the time, sending them notes or emails notifying them of recent events and outlining the benefits of continuing to do business with you is the greatest way to re-engage inactive clients.

Also Read: Why You Shouldn’t Sell A Free Community?

Reactifying your inactive community members – The Wrap Up

Members get inactive for two major reasons; one is that they have moved on from your platform due to some personal reason, and the other is that they have found a new platform that does the same work for them but in a much better way. Well, if their reason is number one, then you have no choice, but if they are getting inactive due to the second reason, you’re down bad. Well, we hope that this article must have educated you on some significant ways in which you can regain the lost members. Thank you for reading!

The Best 5 Email Verification Tools For Your Business

How to promote your brand on social media